To share your memory on the wall of Barbara McKinney, sign in using one of the following options:

She is survived by her husband Charles (Chuck), her sons Mark and Ryan and their wives, her brother Fr... Read More
Barbara-Ann McKinney, 80, died on February 23, 2021 in Naples, Florida. She was born on August 16, 1940 in Fall River, Massachusetts.

She is survived by her husband Charles (Chuck), her sons Mark and Ryan and their wives, her brother Fred Siems Jr., and her five grandchildren. She attended Somerset High School, and was a graduate of the Class of 1957. A year later, she moved to St. Louis, Missouri with her family.

Barbara-Ann attended Lindenwood University in St. Charles, Missouri and was awarded a Bachelors degree in Home & Career skills in August, 1962.

She married Chuck McKinney on December 26, 1966 at the Lady of the Pillar Church in Creve Coeur, Missouri. Her brother, Frederick Siems Jr., was the best man.

The newlyweds moved to Collinsville, Illinois where Barbara-Ann gave birth to their first son and started a Masters Program at Southern Illinois University. They moved soon however, to Hartford, Connecticut when Chuck was offered a Directors position with the Upper Valley Planning at Development Agency. Chuck was a city and regional planner, who worked at several state and regional jobs while in the northeast.

In 1980, the couple moved from Connecticut to Albany, New York where Chuck worked for several NYS agencies. Barbara-Ann finished her Masters Degree in Science and Education from SUNY at Plattsburgh, N.Y. and resumed her career teaching junior high school students in the Albany School District.

The couple retired to Naples, Florida in 2000. While there, Barbara-Ann was a caretaker for her elderly mother and sang in the choir at St. Peter the Apostle Catholic Church. For a number of years, she worked with a committee to decorate the alter at her church, assisted the poor, and worked on an annual golf fundraiser for the church.

Barbara-Ann and Chuck had a wonderful life during their 55 years of marriage. They traveled widely throughout North America, Europe, and visited relatives in Denmark and England.

She was active and healthy most of her life. On a cruise around South America, she left home walking and returned in a wheelchair. After extensive tests, she was diagnosed with cancer. Her strong will and chemotherapy kept her alive for another two years. Her one regret was that she wasn’t able to visit with and hug her five grandchildren because of the Covid-19 Pandemic. She will be missed.

A memorial mass will be held at St. Peter the Apostle Catholic Church in Naples, Florida on April 7 at 10:00 a.m., followed by a Celebration of Life in the Spirit Center at 11:15 a.m. Everyone is invited.

The family requests in lieu of flowers, donations in her memory be sent to Lindenwood University in St. Charles, Missouri.
Read Less

Receive notifications about information and event scheduling for Barbara

We encourage you to share your most beloved memories of Barbara here, so that the family and other loved ones can always see it. You can upload cherished photographs, or share your favorite stories, and can even comment on those shared by others.

Plant a Tree in Memory of Barbara
Plant a tree 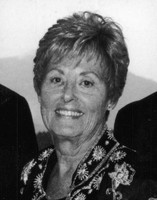