To share your memory on the wall of Dean Arnold, sign in using one of the following options:

Receive notifications about information and event scheduling for Dean

We encourage you to share your most beloved memories of Dean here, so that the family and other loved ones can always see it. You can upload cherished photographs, or share your favorite stories, and can even comment on those shared by others.

Posted Mar 16, 2021 at 02:32pm
Dean F. Arnold, 73, of Pittsburgh, passed away Friday, February 26, 2021, in Naples, Florida, following a brief illness. Born on March 10, 1947, Dean was the son of James F. Arnold and the late Dorothy (Shane) Arnold. After growing up in Pennsylvania and West Virginia, Dean attended West Virginia University, and earned a Bachelor of Science degree in Business Administration in 1969. After graduation, Dean began his career with International Business Machines (IBM) as a salesman and joined the U.S. Army Reserve where he served for six years. His tenure with IBM spanned three decades, regular promotions, countless frequent flier miles from domestic and world travel and moves to five different States (living up to the saying known well by IBM'ers and their families, 'I've Been Moved'). He received numerous "100% Club" sales awards and after being promoted into management, led IBM's division for worldwide sales of industrial personal computers. Following early retirement from IBM, Dean continued working in consulting, management, and executive roles for several technology companies including Oracle and CombineNet. In retirement, Dean made several trips to Italy, France and Aruba with his wife, Linda, sister-in-law, Janet Jones, and close family friend Donna Lane. Most recently, he enjoyed summer vacations with his family in Deep Creek, Maryland and spending the winters with Linda in Naples, Florida. Dean loved working with tools, built several homes (including his first home), and performed home renovations on every home he and Linda, his wife of 51 years, lived in, as well as the homes of his sons, Chris, Jason, and Brent. He seemed to always have a renovation or improvement project underway. Dean was an enthusiastic sports fan and loyal supporter of the West Virginia Mountaineers and the Steelers and Pirates. He coached youth baseball teams for each of his sons and was a fixture in the coaching ranks of little league in Boca Raton, Florida, in the 1980's and early 1990's. An avid golfer, Dean was a member of Diamond Run Golf Club where he enjoyed the company of friends and family in annual tournaments and regular rounds of golf. For nearly 40 years, Dean organized or participated in an annual golf outing, dubbed "The Classic (and Not So Classic)," with a large group of friends and his sons. More than anything, Dean loved his family – he put his family ahead of himself and always provided for his wife Linda and their sons. He taught his children the importance of family, the value of a strong work ethic, and how to balance work and life. He enjoyed frequent family vacations, regular family dinners, and trips to Weirton to visit and care for his Father and his Mother, prior to her passing. Dean was a driving force behind setting up annual gatherings of extended family for Thanksgiving, Christmas and Father's day. Surviving are his wife, Linda T. Arnold; son, Christopher S. Arnold; son, Jason and his wife, Abbe Arnold; son, Brent and wife Lauren Arnold; grandchildren, Marisa Arnold, Dean M. Arnold and James E. Arnold; father, James F. Arnold; brothers, James S. and his wife Phyllis Arnold, Dennis and his wife Joyce Arnold, Tom and his wife Patty Arnold, and Kevin Arnold; and sister-in-law, Janet Jones. Also surviving are many loved nieces, nephews, cousins and close family friends. He was preceded in death by his mother, Dorothy Arnold and sister in law, Penelope Arnold. A memorial, service and celebration of Dean's life will be scheduled in the future when family and friends can gather safely. Donations in Dean's honor can be made to Wounded Warrior Project, P.O. Box 758516, Topeka, Kansas 66675-8516.
Comment Share
Share via: 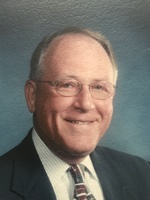