To share your memory on the wall of Frank Loeffel, sign in using one of the following options:

Frank Thomas Loeffel, age 77, of Naples, Florida (formerly of Pittsfield, Massachusetts) passed away on Friday, March 26, 2021 at home after a courageous 16-month battle with Pancreatic Cancer.  His wife Leslee of 40 years, their son Christopher and Christopher’s wife Rachel, were by his side.

Tom was born in New Kensington, Pennsylvania on November 8, 1943, he was the son of the late Elmer A. and Edna Valentine Loeffel.  After graduating high school in 1961, Tom served in the US Navy until September 1968 completing seven tours onboard two different Fleet Ballistic Missile (FBM)  submarines. After his service, he earned his Associates, Bachelor and Masters degrees, through continuing education, while working in the military/industrial complex in Pittsfield, Massachusetts. He retired as the Director of Manufacturing with General Dynamics in December 2007. He and Leslee moved full time to Naples, Florida in August of 2008.

Tom was a devoted Husband, Father and Grandpa who loved to spend time with the family, travel and golf.

There will be a Celebration of Tom’s Life at a later date that is convenient to his family.

In lieu of flowers,  the family requests donations be made to MD Anderson Cancer Center in Houston, Texas https://gifts.mdanderson.org/default.aspx?tsid=10503  or Avow Hospice, 1095b Whippoorwill Lane in Naples, Florida  34105  https://avowcares.org/donate-now/ .

Receive notifications about information and event scheduling for Frank

Print
There will be a Celebration of Tom’s Life at a later date that is convenient to his family.

We encourage you to share your most beloved memories of Frank here, so that the family and other loved ones can always see it. You can upload cherished photographs, or share your favorite stories, and can even comment on those shared by others.

Posted Apr 11, 2021 at 08:27am
Dear Leslee, Chris, and Alyson. So sorry about the loss of your beloved Husband and Father. Tom was truly one of a kind; loving, friendly, reliable, nice sense of humor, a good friend and a great neighbor. We have so many fond memories of our family times spent together. Tom will be truly missed but will be looking down on you keeping his family safe. May the many happy memories comfort you now and always. Love, The Whalens - Kevin, Diane, Michael, Matthew and Daniel
Comment Share
Share via:
KC

Posted Apr 03, 2021 at 07:29pm
Our thoughts and sympathies are with you all, especially our good friends Alyson and Rafael here in New Zealand. Arohanui.

Posted Apr 03, 2021 at 11:53am
Dear Leslee
You and your family have my deepest sympathy upon Tom's death. He loved you so very much and you were a perfect couple. I will pray for God's strength to help you in the long days ahead. I will also reach out to you later if there is anything you need. This road you are on is a difficult one, but you will make it my friend!
Love,
Erin Kinsler
Comment Share
Share via:

Posted Apr 03, 2021 at 08:04am
My deepest condolences to the Loeffels for Tom's passing. Leslee, Alyson, and Chris, I will be thinking of you and sending strength and support through my prayers.
Most of my memories of Tom come from childhood, growing up next-door to the Loeffels and watching in awe as I saw him weekend after weekend tend to the yardwork, quietly, tirelessly, and masterfully. Mowing the lawn, raking the leaves, cleaning the pool. No task seemed out of his wheelhouse. His quiet determination and capability in these chores seemed to me to be emblematic of how he cared for his family: reliable, ever present, and steadfast. It almost seemed effortless, because it was such an integral part of who he was.
Here's to his fine example as a father, and may it inspire us all.
Comment Share
Share via:
BC

Posted Apr 02, 2021 at 11:56am
Dear Leslee. So sorry about your husband Frank. My prayers and thoughts are with you and your family. Hugs. Love Bonnie
Comment Share
Share via: 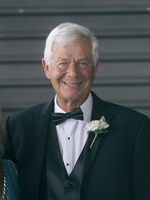