To share your memory on the wall of Jaroslawa Szczerbaniuk, sign in using one of the following options:

Jaroslawa Szczerbaniuk (nee Hryniw) passed away on April 17, 2021 in Naples, Florida with her loving husband George at her side.

Slava, as she was known to everyone, was born in Bolton, England to Ivan and Anna Hryniw -- displa... Read More

Jaroslawa Szczerbaniuk (nee Hryniw) passed away on April 17, 2021 in Naples, Florida with her loving husband George at her side.

Slava, as she was known to everyone, was born in Bolton, England to Ivan and Anna Hryniw -- displaced WWII refugees. She came to the United States with her parents and older brother Mykola when she was 3 ½ years old. She grew up in the Ukrainian Village neighborhood of Chicago, Illinois and attended Catholic grade and high schools before getting her pharmacy degree at the University of Illinois. Having worked in both hospital and retail pharmacy settings, she finished her career after serving our nation’s veterans at the Tomah, Wisconsin VAMC for almost 16 years.

Slava married Dr. George Szczerbaniuk, a radiologist, whom she knew from Ukrainian Saturday school and the community. They lived and worked in Joliet and Monmouth, Illinois and then Tomah, Wisconsin before retiring to their beloved Naples, Florida in late 2008. Slava and George poured countless hours into building their dream home and then growing fruit trees and plants on their lot.

Slava was a very devout Catholic throughout her life and active in her parish.

She leaves behind her grieving husband George of almost 38 years and many other loved ones: Her most bereaved mother Anna; her brother Mykola (Irene) and his children Taras (God-son) and Natalia; as well as sister-in-law Maria (nee Szczerbaniuk) Sosenko, brother-in-law Alex Sosenko, and their children Alex, Teresa (God-daughter), and Nicholas.

Funeral services will be held at 10am on Friday, April 23 at St. William Catholic Church in Naples with burial service immediately thereafter at Palm Royale Cemetery.

In lieu of flowers, Slava would have liked donations made in her name to any of the following:
COMMUNITY PREGNANCY CLINIC – Naples
UNITED UKRAINIAN AMERICAN RELIEF COMMITTEE (UUARC) – for “Aid to orphans and orphanages” in Ukraine
ST. NICHOLAS UKRAINIAN CATHOLIC EPARCHY – for restoration of historic St. Nicholas Cathedral in Chicago

Receive notifications about information and event scheduling for Jaroslawa

We encourage you to share your most beloved memories of Jaroslawa here, so that the family and other loved ones can always see it. You can upload cherished photographs, or share your favorite stories, and can even comment on those shared by others.

Posted Apr 22, 2021 at 10:56am
Dear Slava,
You touched so many lives here in Naples, especially mine. My memories of you are as a kind, prayerful, loving woman. I had the privilege of getting to know you through our Naples Cenacle for Life. May the Lord bless your beautiful soul. Gone but never forgotten.
Ellie O'Neill
Comment Share
Share via:
IS 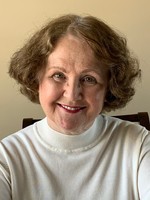