To share your memory on the wall of John Glendenning, sign in using one of the following options:

John Harris Glendenning, known as ‘Jack”, died February 14th, 2021 at his home in Bonita Springs, FL in the company of his family. He would have been 83 on March 27th of this year. He was born in Detroit, Michigan to John and Frances ... Read More

John Harris Glendenning, known as ‘Jack”, died February 14th, 2021 at his home in Bonita Springs, FL in the company of his family. He would have been 83 on March 27th of this year. He was born in Detroit, Michigan to John and Frances Glendenning. He was 6 years old when his father bought a small commercial print shop in downtown La Crosse, Wisconsin, laying the foundation for Jack’s life work and loves.

Jack attended La Crosse Central High School where through the encouragement of his basketball coach he began dating the love of his life, Rosanne Mades. We believe it was initially about getting more playing time as mom was the coach’s teacher’s pet. They were married June 14th, 1958. Jack also played football and ran track, winning the state 880 title his senior year in a blazing 2:01.

Jack attended the University of Wisconsin – Madison. He graduated in 1960 with a degree in Business Administration. He loved the Badgers – in good times and in bad. Even in a year where no one could attend Badger sports in person, leave it to Jack to have his Fan cutout placed so that he shows up at Badger basketball games on national TV!

After college, his father asked him to come back to Inland in a leadership position. He did so reluctantly since the company had remained the same small printing shop John bought in 1944. He brought with him a clear mission and great drive for change. He led Inland into new technologies and new products. His vision put the business on a growth path where it has more than doubled every decade since the 1960s. His sense of humor and compassion for others were traits that many came to know and appreciate.

He was very active in the La Crosse Area community – serving on the La Crosse Norwest Bank Board, The Gillette Pepsi Companies Board, Great Rivers United Way Board (he was also the 1981 campaign chair), Lutheran Hospital Board, The La Crosse Community Foundation Board, Rotary and many more. Jack created a scholarship trust, The Jack and Rosie Glendenning Scholarship Fund, that has helped hundreds of people from the La Crosse area continue their education. He also built the Glendening Family Foundation from the ground up with the mission of improving the lives of children in La Crosse area communities. Importantly to him, these will live on. He gave to countless additional organizations with his time, talent, and treasure, including Our Saviors Lutheran Church in La Crosse, WI and Christus Victor Lutheran Church in Bonita Springs, FL.

Jack loved golf. He had the most beautiful, fluid practice swing. Unfortunately, he eventually had to address the ball. We’re pretty sure that he may have single handily kept many a golf equipment manufacturer in business over his lifetime. He also loved to fish. He enjoyed searching out trophy walleye and northern pike in Canada with a group of friends that did 50 trips in 50 years. He also loved pursuing fish on Lake Arbutus (which he called the “Dead Sea”) and the Mississippi River, where he and Rosie built their dream home, next door to their great friends the Tadewalds. Later in life he spent time fishing the Florida backwaters and on the gulf.

After a very successful career leading what is now Inland Packaging, Jack stepped back to enjoy life a bit more in the mid 1990’s. He and Rosie made a home in Bonita Bay, enjoying golf and the Gulf. Unfortunately, it didn’t last very long as God had different plans. In 2002, Jack became the primary caregiver for Rosie after she suffered a major stroke. Many of us were humbled to see a side of Jack that we pray is in us all - the love, courage, selflessness, dedication, and willingness to do what he’s done for so many years for his beloved Rosie was amazing to behold. It completed his life’s work.

Jack often talked about how he wanted his life to end. It used to include a ramp off the dock at his cottage at Lake Arbutus. He would say, “just wheel me up and let me go!” His life did not end with nearly that amount of excitement and intrigue, but that didn’t throw Jack for a loop. We know he is up in Heaven repeating his favorite saying in the face of any challenge - “It is what it is.”

In lieu of flowers, please donate to The Gundersen Foundation or a charity of your choice in his name as a memorial. A celebration of life will be held in La Crosse, WI when COVID-19 restrictions allow.

Print
A celebration of life will be held in La Crosse, WI when COVID-19 restrictions allow. 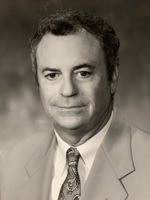