To share your memory on the wall of John Katsigianopoulos, sign in using one of the following options:

John Spiros Katsigianopoulos was born on October 21, 1942 in New York City. He attended Brooklyn Technical High School and The City College of New York where he studied electrical engineering.

He worked in the defense and spac... Read More

John Spiros Katsigianopoulos was born on October 21, 1942 in New York City. He attended Brooklyn Technical High School and The City College of New York where he studied electrical engineering.

He worked in the defense and space industry as an electrical engineer and test engineer for Norden Systems, United Technologies, and Northrop Grumman.

John was a very kind and generous man who loved to help those in need. He was selfless never looking for reward nor recognition. He was a man of his word. Loyal, trustworthy, and honest in every interaction he had. He touched many, many lives, and never said no to those in need.

John was steeped in his Orthodox Faith and Greek heritage, and it is from this that the great love and devotion grew for those he knew. He was a devoted husband to Georgia, the love of his life. He loved his only niece, Maria Manos Ehrhardt, and his godchildren (Marisa Guzman Colegrove, Michael David Guzman, Lambrini Ananiadis Papakosmas, Xanthi Ananiadis and Ioanna Ananiadis Philippopoulos).

John felt himself fortunate to have been given the tremendous gift of a new surrogate Florida family, which emanated from the close ties to his church and Greek community. He was active in his neighborhood as a caregiver. You would be hard pressed to find a more loyal friend.

John loved a good cigar, his scotch, and sitting with friends in deep discussion on his lanai or anyone else’s’. Those he had the pleasure of speaking with knew that John never minced his words and said what he believed. John loved all music and never turned down the opportunity to dance to Zebekiko. Every early Easter morning, as a labor love, he would be found roasting a lamb on a spit for all to enjoy later in the day.
John had a deep love and devotion for his country, and was proud of his service in the Navel Air Reserve. He was a true patriot.

Visitation from 10:00 to 11:00 immediately followed by the funeral service. Burial at Palm Royale Cemetery on Vanderbilt Beach Road.

No flowers, please. John would appreciate, if you so wish, a donation in his memory to be given to St. Peter’s Orthodox Church. 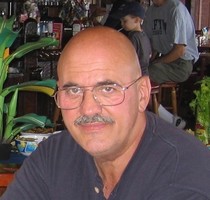