To share your memory on the wall of Richard Wesley Sloat, sign in using one of the following options:

Born in Detroit MI in 1927, Dick grew up in Brightmoor during the Great Depression. Shortly after Pearl H... Read More

Born in Detroit MI in 1927, Dick grew up in Brightmoor during the Great Depression. Shortly after Pearl Harbor, Dick enlisted in the Army Corp of Engineers at the young age of 15. He was stationed in the Pacific Theater from 1943 - 1945.
At the end of World War II, Dick returned to Detroit and learned a new trade called auto body repair. He became a very skilled mechanic, eventually starting his own business, Highland Road Collision, in White Lake MI.

Dick married Helen Bates, also from Brightmoor, in 1955. Together they had three children, two daughters and a son. In 1970 they relocated their family to Union Lake MI and started their collision business. Tragically, Helen passed away on her 57th birthday in 1987.

Dick moved to Estero FL in 2001. He met Judy O’Connor in 2004 and they married on his 80th birthday.
Dick was an avid golfer and all around outdoorsman. He loved to ski, snowmobile, horseback ride, hunt and fish. He had many close and dear friends who sadly have all passed away before him.

The family asks that memorials be made in Dick’s honor to his favorite charity, Shriners Hospitals for Children.

Receive notifications about information and event scheduling for Richard

We encourage you to share your most beloved memories of Richard here, so that the family and other loved ones can always see it. You can upload cherished photographs, or share your favorite stories, and can even comment on those shared by others.

We want to express our sincere sympathy with the passing of Dick. He was always such a kind and friendly gentleman and always had a smile. He will be missed by many in Wildcat Run. We are keeping all of you in our thoughts and prayers! 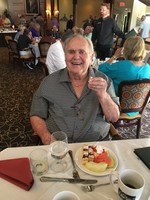 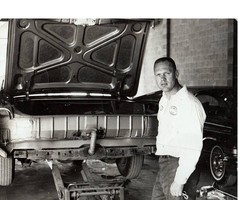